Reuters Institute: UK consumers stumble upon news rather than seeking it out.

Karan Chadda explores UK digital news consumption based on a recent report published by the Reuters Institute and finds that consumers no longer seek out news. Although this is based on UK data there is a trend relevance that can be applied for South Africa – and the rest of Africa for that matter, but bear in mind that the consumption of news on the mobile phone has a much greater take-up.

Traditional media (TV, radio and print) retains its hold on our attention with 85% of those surveyed saying they access news through these channels during an average week. Online news consumption is catching up with almost three-quarters (73%) of UK adults accessing news digitally.

We might be embracing digital news, but established news brands are in a strong position. 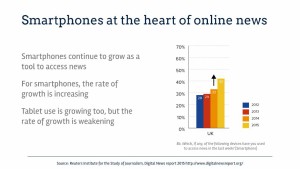 Four in five (82%) of those accessing online news, access the website or app of a traditional news brand. Of those who access news on their smartphone, half use a single source on their phone. Online, one brand stands out above all others: the BBC. It is the most widely used news source across all devices, from smartphones (62%) to desktops (66%), and also leads on app usage.

We will not pay 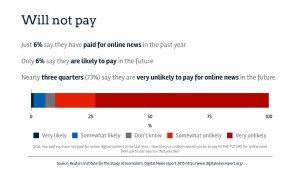 Newspapers, seeing falling print sales, face a tricky conundrum with online audiences. The study reveals 38% of UK adults read a paper and 35% read the website or app of a newspaper. Digital audiences are gaining parity. The problem is the digital audience will not pay. Three-quarters (73%) of UK adults say they are very unlikely to pay for online news.